ElarmS is a robust earthquake early warning system that has successfully alerted on hundreds of events throughout California since it was developed in 2007. We have recently begun expanding ElarmS coverage into the Pacific Northwest (Washington and Oregon) and there are versions of ElarmS being tested in countries around the world, including Israel, Turkey, and Chile. ElarmS is one of the fastest earthquake early warning algorithms running in the world, and even sent out an alert for an earthquake before the damaging S-waves arrived at the surface!

ElarmS is a network-based earthquake early warning algorithm. It currently requires P-waves to be detected at 4 stations before it can issue an alert. Though we are experimenting with novel devices and methodologies to reduce the number of stations needed, we’ve found that 4 is a good number of stations to create robust alerts. 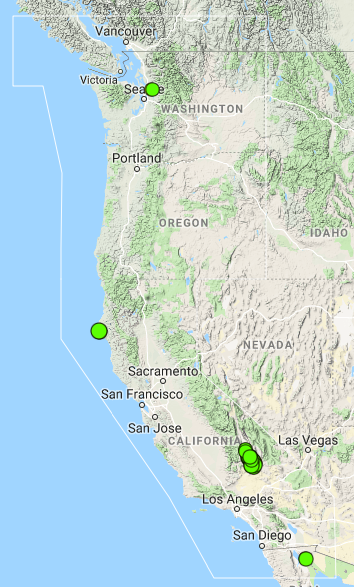 Since a production version of ElarmS began running in early 2016, it has detected 19 earthquakes with magnitude M>4 in California (see figure). For these events, the median estimated magnitude error was 0.3 magnitude units, the median distance error was 3.9km, and the median alert time (time between when the earthquake occurred and when the first alert was sent out) was just 7 seconds.

EPIC is a slightly modified version of ElarmS adapted for use by the ShakeAlert production system. With the transition from ElarmS to EPIC within the ShakeAlert system, a distributed model of software maintenance has been enabled and the Berkeley team very much appreciated the contributions of the other ShakeAlert partner institutions.

What Can We Do with Earthquake Early Warning?

The ElarmS earthquake early warning system is an incredibly useful tool that may one day be used to provide alerts of imminent earthquakes to people throughout the West Coast. Though warning times range from just a few seconds to tens of seconds, the warnings provided could be used to slow down high-speed trains, provide warnings people working in precarious conditions (for example, surgeons, construction workers, and those working with dangerous equipment and/or chemicals), and possibly trigger automatic shutdown of critical equipment. These warnings can also be used by the general public to give them time to take cover under a table and move away from unsafe situations (for example, large glass windows). 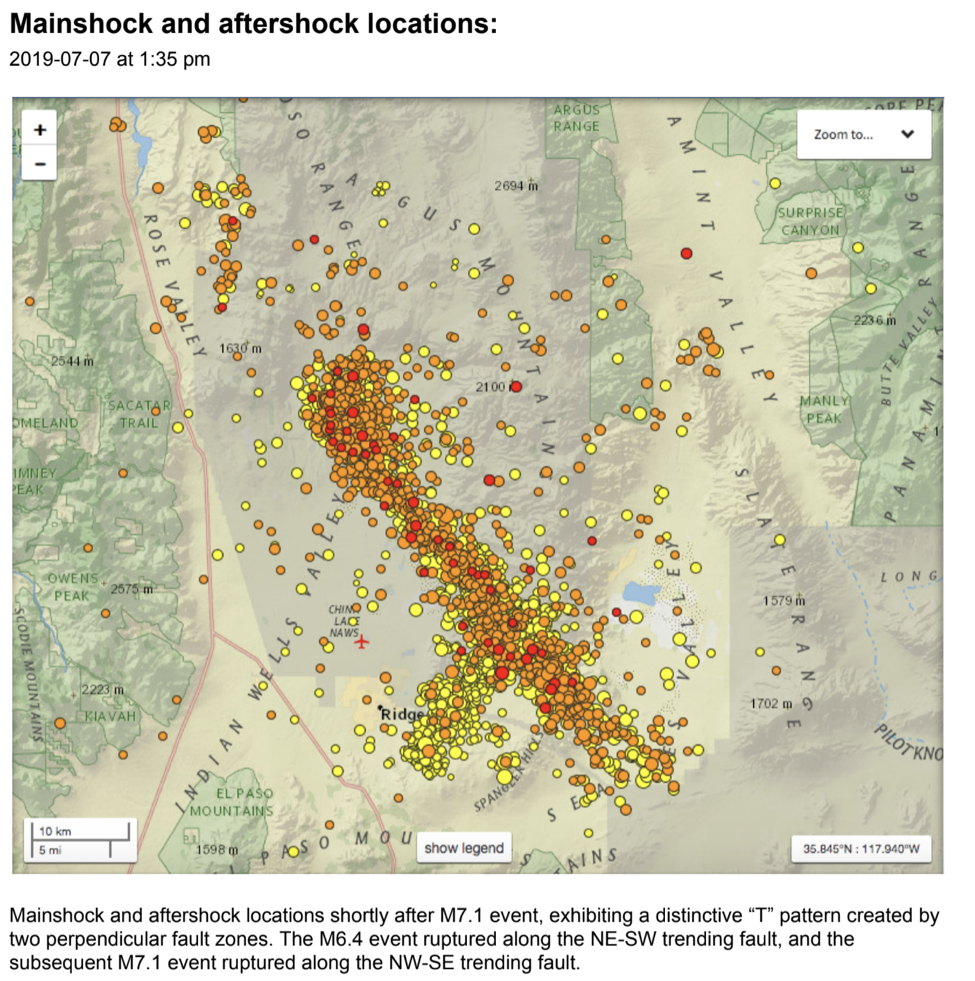 A ShakeAlert was issued for the July 5, 2019 M7.1 event 8.0 s after the origin time. BSL’s EPIC algorithm (an updated version of ElarmS) was the first to report. Information from the FinDer algorithm updated results shortly thereafter, and both agreed on a final magnitude estimate of M6.3. Shaking was widely felt throughout California, including light to moderate ground shaking in Los Angeles, weak shaking in the San Francisco Bay Area, and felt shaking extending at least as far east as Phoenix and as far north as Sacramento.

NBC Universal was the only pilot in Southern California for which automated actions were triggered on their hand held radios. USC used the UserDisplay to manually alert over their radios. An alert was not issued via the ShakeAlertLA app to Los Angeles because the estimated intensity was below the required threshold to alert. Many Angelinos would have liked to get a warning for that level of experienced shaking. This prompted the USGS to reassess and ultimately lower the warning threshold for smartphone apps. 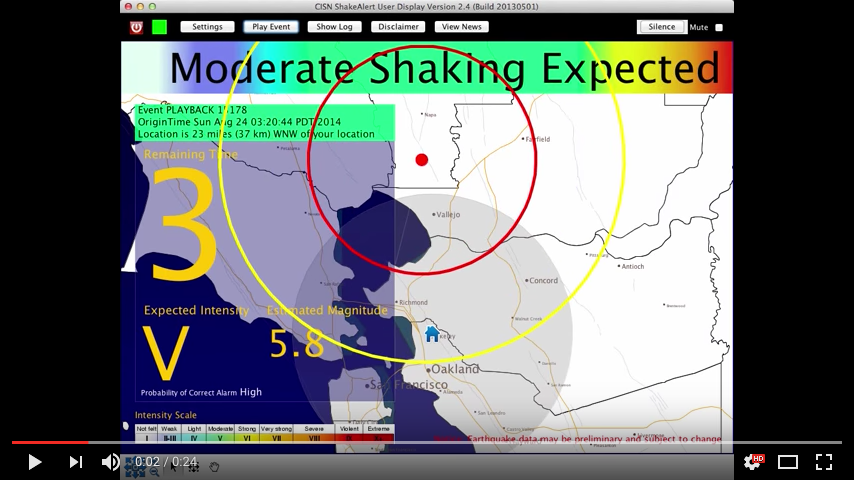 The above is a video capture of the warning received at the UC Berkeley Seismological Laboratory. It shows the 5 second countdown to the beginning of shaking in Berkeley and the expected shaking intensity in Berkeley which was 4 (shown IV) on the intensity scale and described as "light" shaking. The strongest shaking in Berkeley occurred 10 seconds after the alert was received.

User actions: Our beta-testers across the San Francisco Bay Area received the alert at the same time as the Berkeley Seismo Lab. BART has implemented an automated train-stopping system. The system activated and would have stopped trains, however, at 3:20 in the morning there were no trains running. The alert was received in the 911 center in San Francisco and the the UC Police. 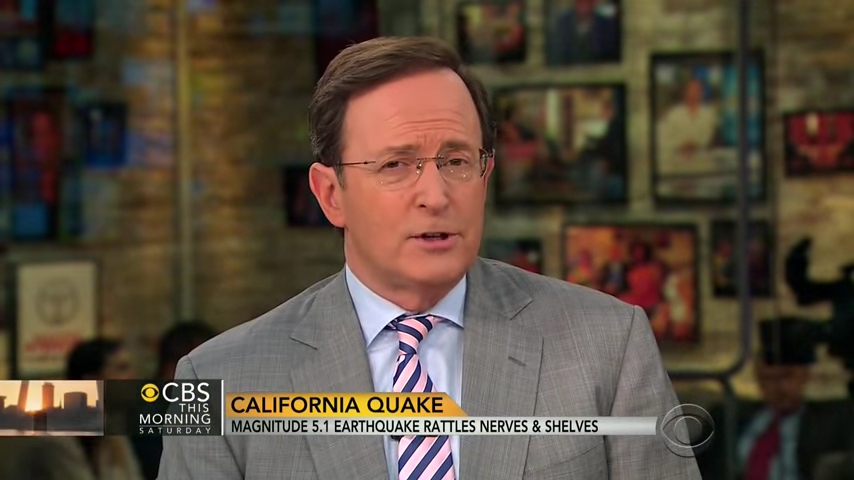 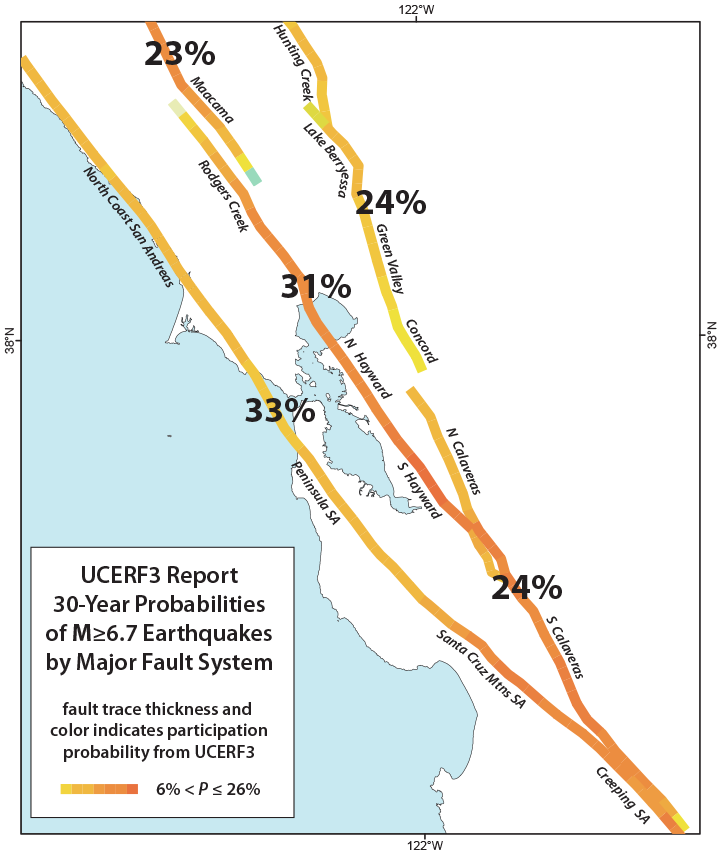 Image from Uniform California Earthquake Rupture Forecast showing probability of a damaging earthquake on each fault within the next 30 years. Color gradient on faults refers to probability that fault segment will rupture, while percentages in bold refer to rupture probabilities for each fault as a whole.