Extremely Useful – But Not a Perfect System

After California's Governor Gavin Newsom publicly launched earthquake early warning (EEW) for the Golden State last week, about half a million people downloaded the MyShake app onto their smart phones. MyShake is currently the fastest way to receive a warning of impending seismic upheaval at your location. Its messages are based on the West Coast wide ShakeAlert EEW system. In his speech Newsom pointed out, that ShakeAlert is not a perfect system. But it is clear that the benefits of even an imperfect warning far outweigh the risk of the status quo, which leaves the population completely in the dark regarding impending seismic shaking. 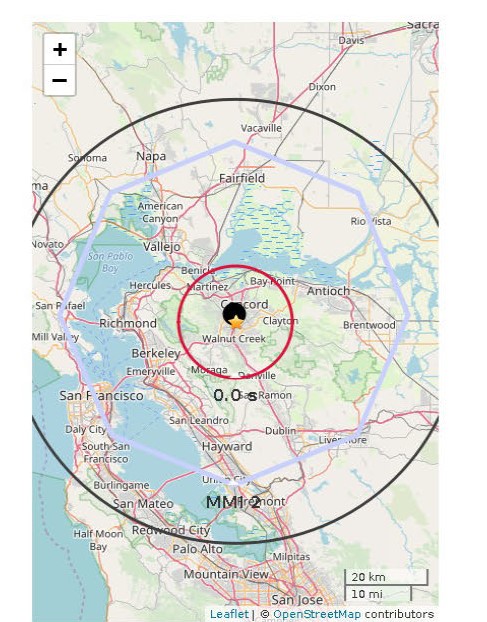 When the magnitude 4.5 earthquake struck in Pleasant Hill east of San Francisco on the evening of October 14, 2019, ShakeAlert performed as planned. However it takes the automatic system a few seconds to detect the seismic waves and then perform the necessary calculations before the alert can be issued. During that time, the seismic waves continue to propagate. Therefore people close to the epicenter (yellow star) might feel the shaking before the alert reaches them. That exactly happened to the blogger during this particular quake. He lives within the red circle, which depicts the area, where the seismic waves outrun the warning system.
Source: ShakeAlert.

The current state of ShakeAlert can be compared to the early days of weather forecasting or tsunami warning. These systems have substantially improved over the decades. Even while they were in use, scientists implemented new computing techniques and algorithms, based on the deployment of new sensors as well as new insights into the physics of the atmosphere and ocean wave propagation. This development is still going on, resulting in continuous improvement both in accuracy and in improving warning times.

So what can the currently more than 400,000 California residents who downloaded MyShake expect, and what are the challenges scientists are working on?

The fundamental problem is the lack of really large earthquakes along the US West Coast. Obviously, this is a great blessing for society. But developers of any technical system will tell you that the best way to bring a prototype into production, is to perform dozens or even hundreds of test runs. Because we don't have that many large temblors, the performance of Shake Alert in such an event has not be tested during a really big temblor. Many of the underlying assumptions rely on models. The largest quake which occurred in California during the development phase of ShakeAlert was the magnitude 7.1 quake in Ridgecrest during the Fourth of July holiday this year. While the system issued timely warnings, some aspects of its performance were less than perfect.

As mentioned in our blog last week, MyShake will only issue alerts to phones in the areas where ShakeAlert expects perceptible shaking. These areas are calculated by computers within fractions of a second. Because the calculations are also based on models, the extent of these areas may not correspond exactly to the actual regions with shaking, and strength of the shaking may not match the forecasts. That means some people will get warnings even though they do not experience shaking, while others may not get a warning although the ground beneath them does shake.

As ShakeAlert and MyShake continue to operate and we gain experience and collect new data, we expect to improve the systems and reduce the impacts of these imperfections. One thing, however, cannot be changed: The lightning speed with which seismic waves travel through the Earth's crust. The potentially destructive S-waves travel on average with a speed of about 2 miles a second, or more than 7000 miles per hour. Even the fastest computers take a few tenths of seconds after the first detection to perform the ShakeAlert calculations. It takes another several seconds to deliver the alert to smart phones. Then it is up to the user to heed the warning and find a good spot to "drop, cover and hold-on". This entire process may take ten or more seconds, with the user's reaction time being the greatest uncertainty.

But neither ShakeAlert nor any other man-made technology can stop the seismic waves from propagating during that time. If you live close to the epicenter you might feel the shaking well before you receive the MyShake alert (see figure). This is based on the laws of physics, which cannot be circumvented at all. This is similar to the fact, that it takes eight and a half minutes for the light of the sun to reach the Earth. Whatever we see on the sun is therefore at least 500 seconds old.

Do all these shortcomings mean that ShakeAlert and EEW are useless? We hope you agree with the blogger that the answer is "absolutely not". Saving even one life or avoiding one serious injury is worth the effort. Just imagine, it could be your life that will be saved by knowing that the shaking is coming. (hra170)