Destruction in the Eastern Aegean Sea

At least 14 people were killed in the magnitude 7.0 earthquake, which struck the eastern Aegean Sea near the Turkish Coast on Friday afternoon (local time). Surprisingly, this quake caused a tsunami along the Turkish coast and on some Greek islands. At least one person drowned in the waves. It is the second time this year, that a deadly temblor has struck Turkey, which is one of the seismically most active countries in the world.

Although historically the two countries Greece and Turkey are strong antagonists, they share a common and very real tectonic hazard. The entire region, which also includes the island of Cyprus in the Eastern Mediterranean, is stuck in the ever tightening vise caused by the collision of the African with the Eurasian tectonic plate. While Africa is slowly moving northward, it hits the rather stable giant Eurasian plate all along the Mediterranean Sea, from Morocco in the West to Egypt in the East. Greece and Turkey comprise the eastern part of that collision zone. The zone ends in the east when it encounters the Arabian Plate, which is moving northwards more rapidly than Africa.

The main consequence of the collision is that the major part of Turkey, the so called Anatolian block, is squished out towards the west in a slightly rotating, counterclockwise movement. This motion leads to deadly tectonic movements along the two major seismic faults in Turkey. The last killer quake in Turkey took place on one of them, the East Anatolian Fault. However, most of the seismic activity happens along the North Anatolian Fault (NAF), an almost 1000 mile long tectonic demarcation line, which separates the Anatolian Block from the Eurasian Plate. Like the San Andreas Fault in our back yard, the NAF is a right lateral strike slip fault.

In contrast to its sharp eastern and northern boundaries, which are dominated by individual faults, the western edge of the Anatolian block is a more diffuse seismic zone. The slight southwestern movement of this block collides with the Earth's crust under the Aegean Sea, a beautiful area dominated by hundred of islands, which all belong to Greece. Despite the collision, all of the Aegean Sea is under tectonic tension. This leads to normal faulting quakes, a kind of temblor where the upper fault flank slides down the lower side of the fault. Today's quake was exactly of that type. 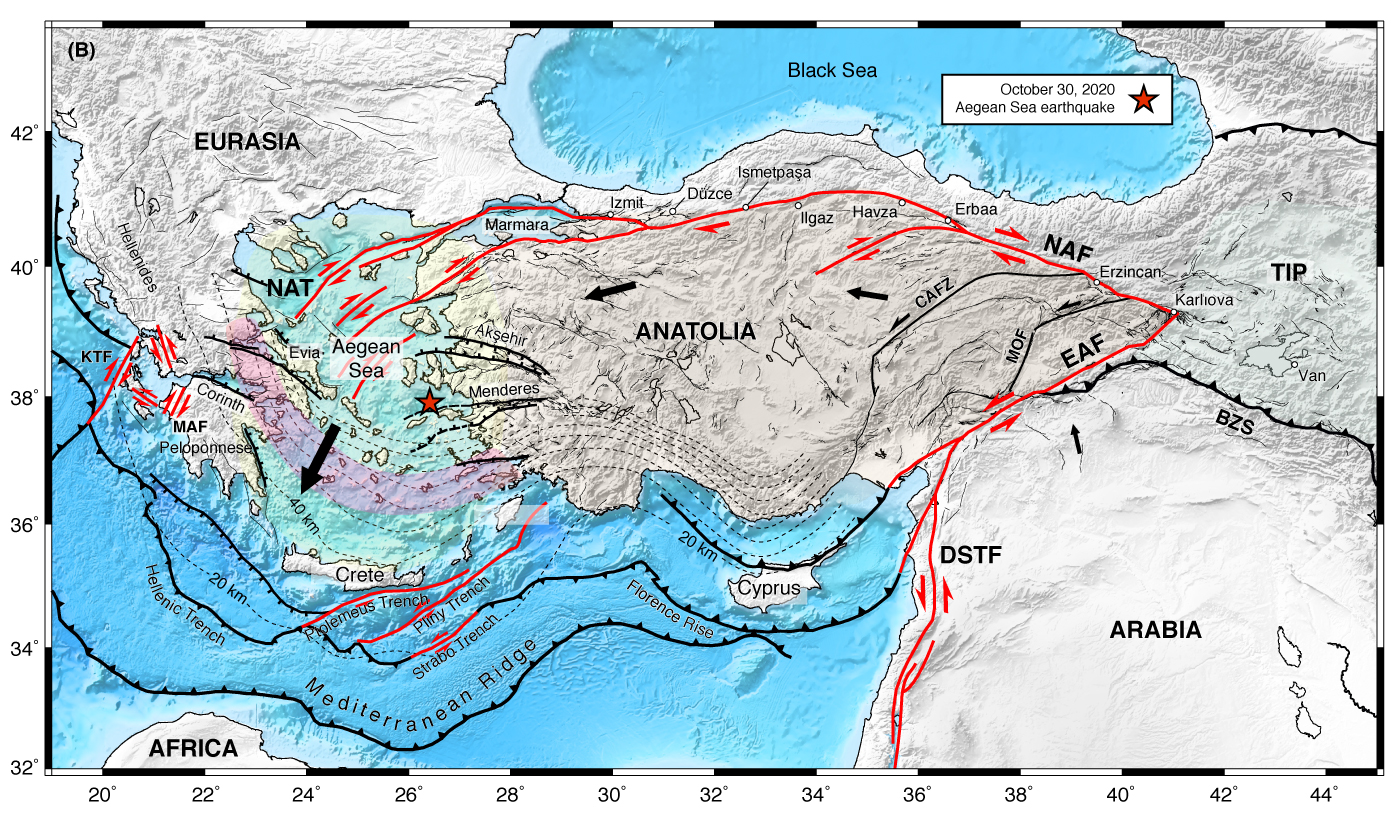 Figure 1: Squeezed between Africa and Eurasia, the countries of Greece and Turkey bear the brunt of the tectonic forces in the Eastern Mediterranean. The black arrows show the plate movements, EAF and NAF are the East and the North Anatolian Fault respectively, DSTF stands for the Dead Sea Transform Fault, running through Israel, Jordan and Western Syria. The epicenter of Friday's quake is marked by the red star.
Source: Sylvain Barbot, University of Southern California

As its focus was located under the shallow waters between the Greek island of Samos and the Coast of Turkey, the sudden downward slip of one of the fault blocks caused the seafloor to drop – thereby creating a tsunami. The wave reached a height of approximately two meters along the coast and led to boats being ripped off their moorings and some coastal roads being washed out. While tsunamis in the Pacific Ocean are common, they are more rare in the Mediterranean Sea. Due to the close proximity of the land to the epicenter of this quake, there was no time to warn the population of the approaching tsunami waves, which hit many areas of the coast within a few minutes after the shaking had stopped.

However, the major damage caused by this quake occurred in Izmir, Turkey's third largest city, about 40 miles north of the epicenter. Several apartment blocks collapsed burying dozens of people underneath the rubble. At least 12 people had been found dead within the first 16 hours after the quake.

The two frightening minutes when the quake struck Turkey are caught in this video taken by a security camera in a bakery in the Turkish town of Izmir.

The Aegean Sea experiences many quakes, among them the strongest temblor recorded during the 20th century in Greece. In July 1956 the region was shattered by a magnitude 7.7 quake. Its focus was located southwest of today's temblor between the islands of Naxos and Santorini. It was followed 13 minutes later by a magnitude 7.2 aftershock. These two quakes were also followed by a large tsunami. A total of 53 people lost their lives as a consequence of these disasters. (hra174)