A Shock WIthout Aftershocks

When the blogger called the big magnitude 8.1 earthquake, which occurred off the coast of southern Mexico on September 8th, a rare event, he couldn't have known that our neighbor to the south would be shaken by an even stranger temblor 12 days later. The hypocenter of Tuesday's quake, which has cost at least 220 lives and destroyed dozens of buildings in Mexico City, happened in a region of central Mexico with very little previous seismicity. Even more surprisingly, the deadly quake has not been followed by any significant aftershocks in the first 24 hours after its occurrence. Normally, seismologists expect that a strong quake of magnitude 7.1, like Tuesday's, would be followed by hundreds of aftershocks. A comparison by the National Seismological Service of Mexico underlines this usual behavior: By Wednesday at noon their seismometers had registered more than 3400 aftershocks to the quake in the Gulf of Tehuantepec on September 8th. But there have been none in the region of Tuesday's quake. 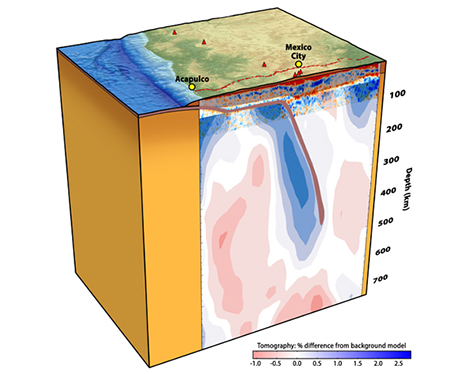 Fig 1. The Cocos Plate and its strange dive: Starting at the Middle American Trench off Acapulco, the Cocos Plate (solid red line) begins its subduction under a shallow angle. Then it runs horizontally hugging the overlying North American Plate. Once it reaches the volcanic belt near Mexico-City it plunges steeply into the Earth's mantle. (From Perez-Campos et al., GRL 2008)

There are, however, some similarities between the two temblors. Both happened in areas where the Cocos Plate is diving under larger tectonic plates. In case of the quake two weeks ago it is disappearing beneath the Caribbean Plate, and on Tuesday the Cocos Plate ruptured where it dives under the North American Plate. In addition, both quakes were caused by similar movements along seismic faults. In subduction zones, such "normal faulting" occurs only within the plates which are vanishing into the Earth's mantle. However, the descent of the Cocos Plate under North America is rather unusual. 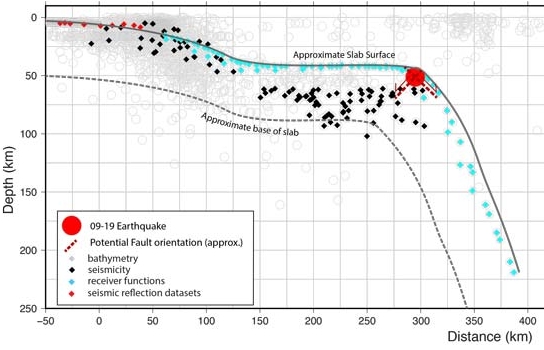 Figure 2: This cross section of the Cocos Plate shows that the hypocenter of Tuesday's earthquake (red circle) lies exactly at the bend where the Cocos Plate begins its final steep dive. (Source NEIC/USGS)

About ten years ago seismologists from Caltech in Pasadena and the Universidad Nacional Autonoma de Mexico (UNAM) in Mexico City discovered that the Cocos Plate is taking a rather circuitous route on its way down into the mantle. The dive starts at the Middle America Trench, a deep ocean trench several dozen miles off the Pacific coast of Mexico and Guatemala. At first, the plate descends at a typical angle for subduction zones, say 30 degrees or so. But then for reasons yet to be understood by Earth scientists, the downward movement stops and for the next 150 miles the Cocos Plate moves horizontally (see Figure 1). It "hugs" the North American Plate above it. But once the plate has reached the volcanic belt in Central Mexico, roughly at the location of Mexico City, the Cocos Plate unfurls and plunges further into the mantle at a rather steep angle of more than 60 degrees from the horizontal. Tuesday's quake occurred exactly at this bend at a depth of about 35 miles (see Figure 2).

It remains to be seen if this unusual hypocentral location is the reason that no aftershocks have yet been measured. Currently most seismologists are puzzled by the missing follow-up quakes. Some have even begun to ponder whether Tuesday's quake was really a typical main shock. Or was it was a foreshock, a prelude and harbinger of bigger things to come? (hra146)