It was a balmy morning reminiscent of Indian summer 140 years ago today. Many of the 260,000 people who lived in the Bay Area in the late 1860's were already busily engaging in their day's activities. Their hustle however came to an abrupt halt, when at seven minutes before 8 am, the Earth under a 900 square mile region, from Gilroy and Santa Cruz in the south to Santa Rosa in the north, began to shake violently. The Hayward Fault had gotten loose and shook off its tectonic stress in an earthquake with a magnitude of almost 7. 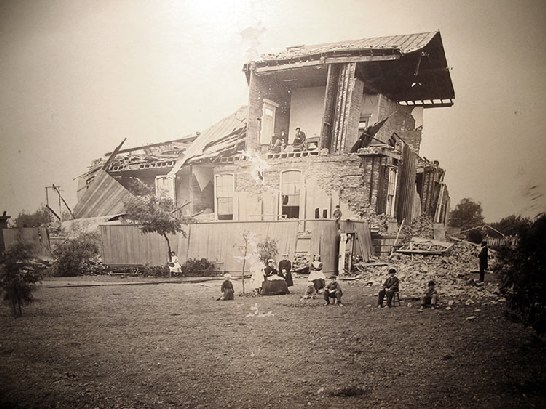 When the shaking was over, nearly every building in Hayward was extensively damaged or completely wrecked, while in San Leandro, the second floor of the Alameda County courthouse collapsed and many other buildings were destroyed. The most famous victim of the quake's fury was Mission San Jose, at that time almost 100 years old. Its adobe walls crumbled and the church was left in ruins.

While Hayward and San Leandro bore the brunt of the seismic shaking, major damage also occurred on the other side of the Bay. Indeed, the destruction in San Francisco was so large that the temblor became known as the "Great San Francisco Earthquake." This honorary title was removed four decades later, when a bigger earthquake came along - the disaster on April 18, 1906, when most of the City went up in flames.

During the Hayward quake 140 years ago today, the ground cracked in a straight line that could be traced for nearly 20 miles from San Leandro south to Arroyo Agua Caliente. And unlike the modest cracks in the Hayward parking lots today, this was a huge gash along which the flanks of the fault slipped past each other about six feet. 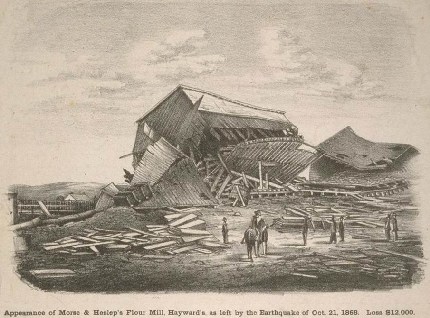 Were a similar earthquake to occur today, the consequences in damage and human life would be immensely greater and far more serious than those of Hurricane Katrina. The "1868 Hayward Earthquake Alliance," a private-public consortium of 123 organizations raising awareness about the imminent danger lurking under our feet, has put together studies and scenarios by various researchers and modelers about the potential earthquake's frightening aftermaths: The immediate commercial and residential economic losses, including damage to private buildings and their contents would surpass $120 billion. Thousands of people might be unemployed due to damage to commercial and industrial buildings, and at least 90,000 residential units would be destroyed, displacing almost 220,000 residents. Major transportation infrastructure, such as Interstates 580 and 880 and the Caldecott Tunnel, are likely to be unusable for months. BART and the major rail lines will be affected and might not run for weeks. Water tunnels and pipelines supplying drinking water from the Sierra to the Bay Area are likely to break and leave residential and commercial spigots dry for days or weeks.

Learn of how you can protect yourself and your neighbourhood in a public lecture at the East Bay campus of the California State University this coming Thursday at 7pm. (hra012)