The MNRC site is on property owned and formerly operated by Homestake Mining Company as a surface gold mine. The geology of the area is extremely varied and complex. With the conclusion of mining operations, the property will be managed by UC Davis as the McLaughlin Reserve (part of the University of California Natural Reserve System. The seismographic vault is the first new research project on the reserve. The site is located approximately 20 kilometers east of the town of Lower Lake, California in an area of Franciscan sandstone.

Support for MNRC was provided by the Governor's Office of Emergency Services as part of the California Integrated Seismic Network.

A steel and concrete vault from a shipping container similar to those found at stations JCC, PKD, and HOPS was constructed. Power and telephone lines were trenched approximately 300 meters to the site. Because of the remoteness of the site, digital telephone data circuits are not available. Telemetry was established in spring 2004 using a radio network that brings the data down to Napa and into the frame-relay network.

Antenna mount is embedded in wall of concrete seismic vault, built on bedrock.

Time series processing at the BSL

The effects of multipath on the data are estimated by parameters for L1 and L2 (MP1 and MP2 respectively); see Estey and Meertens (GPS Solutions, 1999) for derivation. The daily value is the RMS of MP1 and MP2 throughout the day and for all satellites. Higher values indicate a greater prevalence and/or strength of multipathing, i.e. objects on the ground are providing multiple reflection pathways from the satellite to antenna. 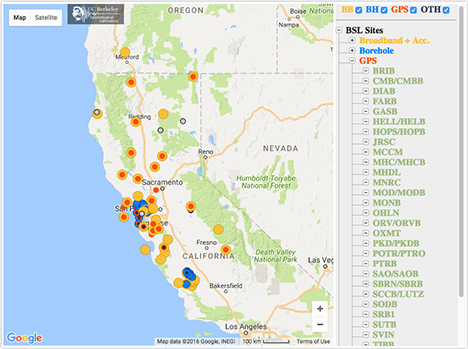