For five months in 2008, a swarm of shallow earthquakes alarmed residents as they shook the Mogul neighborhood of West Reno, NV. Earthquake depths as shallow as 1 km below the Earth’s surface were widely felt, even at low magnitudes. Scientists rapidly moved to install temporary seismic instrumentation in west Reno for the purpose of recording the quakes, from the larger earthquakes down to micro-seismicity. The biggest quake, with a moment magnitude of 4.9, was unusual. This earthquake's sense of slip - the relative motion of the rock on each side of the fault with respect to the other side - was different from the so-called "dip-slip" faults that geologists had mapped in the area. 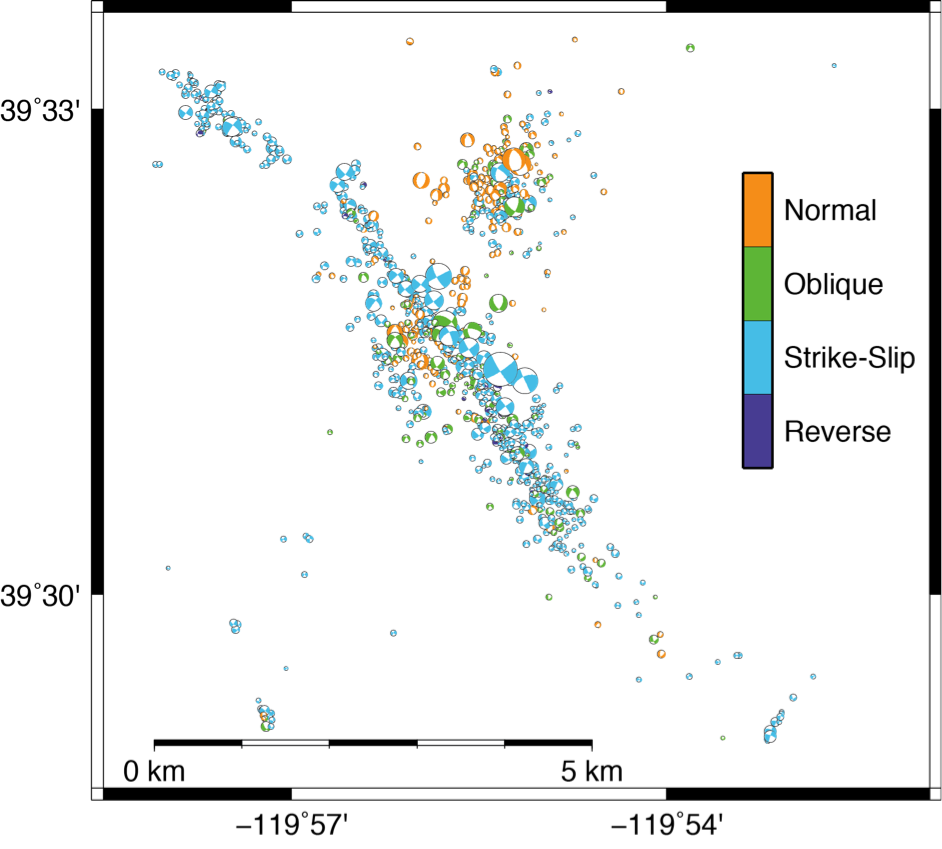 Beach-ball diagrams from tiny earthquakes in the 2008 Mogul swarm.

In a paper to be published in JGR: Solid Earth, Berkeley Seismology Lab post-doc Christine Ruhl and colleagues at University of Nevada, Reno and Boston University have mined the high-quality earthquake data set collected during the Mogul sequence to elucidate the structure of the faults active in the swarm. Ruhl and others used a technique called double-difference relocation to precisely determine the location of as many earthquakes as possible, including the tiniest recorded quakes in the swarm. They also computed focal mechanisms for more than a thousand earthquakes, ranging in magnitude from 4.9 down to magnitude zero. Focal mechanisms, the basis of the "beach ball diagrams" shown in the figure at right, tell seismologists which way the faults slipped and how the faults are oriented.

The team discovered more about the behavior of the swarm, revealing distinct clusters within the sequence and that it was driven by fluid beneath the surface. Fluids often play an important role in earthquake triggering; increased pore pressures facilitate rupture and enable swarms of seismicity to occur. Their work also revealed more about the faulting beneath west Reno: the quakes delineated the structure of the previously unknown Mogul fault, which may be evolving into a strike-slip fault zone, where motion is primarily horizontal.

Says Ruhl, “Temporary deployments during unusual earthquake sequences were essential for our very detailed study of the Mogul earthquakes and will continue to be an important tool in investigating the evolution of complex seismic sequences in the future.”

For researchers: View the paper at JGR: Solid Earth.