Deadly Earthquakes in the Muertos Trough

For the past eleven days, the US territory of Puerto Rico has been shaken by hundreds of earthquakes, culminating in a magnitude 5.8 temblor on Monday and a deadly magnitude 6.4 quake in the early morning hours of today (Tuesday, local time). At least one person was killed by a collapsing wall inside a house in the southern city of Ponce and dozens of others sustained serious injuries as a result of the strongest ground shaking on the island in six years. Many buildings collapsed, including at least one multi-story school in the island's south coast town of Guánica. 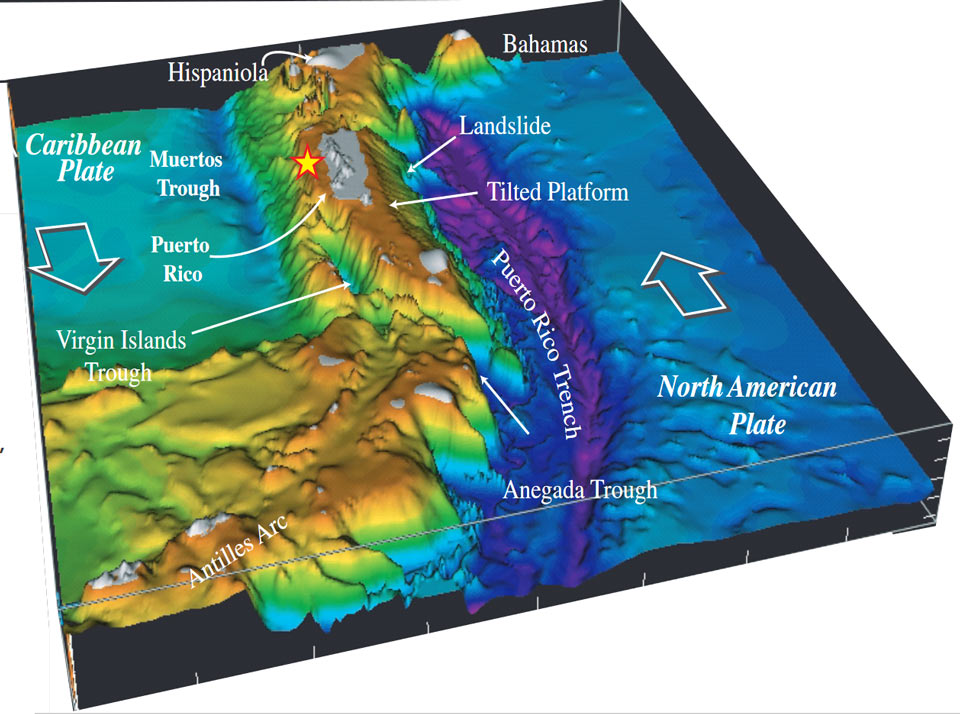 Figure 1: This oblique view from the east shows the bathymetry of the northern section of the Caribbean. The Puerto Rico Trench is the purple area to the right (north) of the US territory, the Muertos Trough lies south of it. All land areas of the Antilles islands are depicted in grey. The epicenter of Tuesday's deadly quake is marked with a yellow star.(Source: USGS)

The latest series of earthquakes is located offshore, just south of the island's southwest coast. It started on December 28 with a magnitude 4.7 event. Since then, more than 400 quakes with magnitudes of more than two have been recorded. Because their hypocenters are shallow, lying only six miles below ground, many of the bigger ones where felt on land, rattling the nerves of the population which is still trying to recover from hurricane Maria, which devastated Puerto Rico in September 2017.

The US territory in the Caribbean and its population of more than three million people are no stranger to earthquakes. In 1918 the so-called San Fermín quake with a magnitude of 7.1 occurred off the northwest shore of the island. It caused a tsunami which innundated the towns and villages on the west coast with wave heights of up to 20 feet. The fatalities were never fully counted, but it is believed that more than 100 people perished as a consequence of the shaking and the tsunami. In 1787 an even stronger quake shook the island. Although no seismic instruments measured the strength of this event, it probably had a magnitude of more than 8, making it one of the strongest quakes to hit the Caribbean area in historic times. However, no casualties caused by this dramatic shaker were ever recorded. Its hypocenter lay north of the island in the Puerto Rico trench. 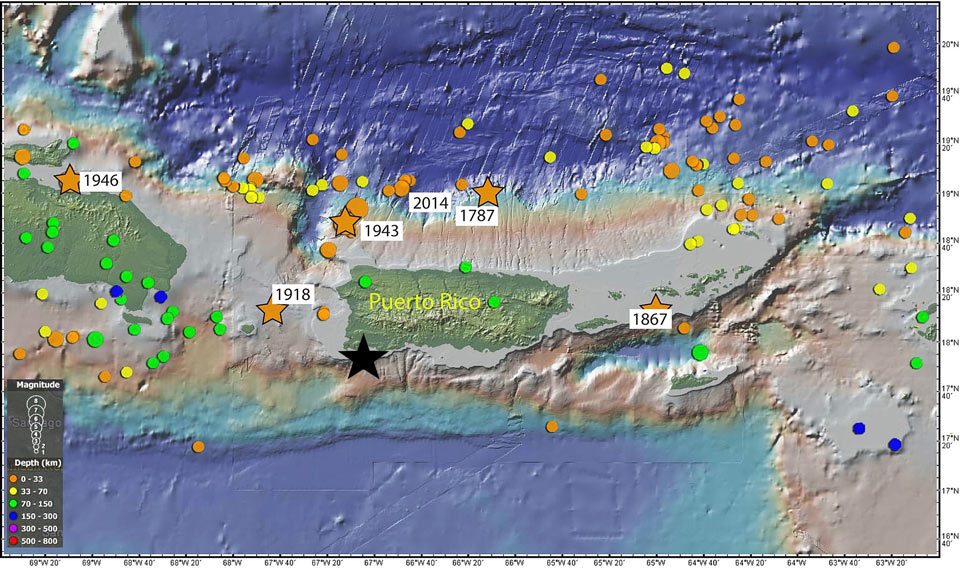 Figure 2: This map shows the historic seismicity around the island of Puerto Rico. The San Fermin quake of 1918 caused a large tsunami, destroying much of the west coast of the island. The black star marks the location of Tuesday's magnitude 6.4 earthquake. (Source: USGS)

The cause for all the seismic activity in Puerto Rico and on its western neighbor, the island of Hispaniola comprised of Haiti and the Dominican Republic, is the fact that this region of the Greater Antilles is being squeezed tectonically between two lithospheric plates. North of the two islands the giant Atlantic Plate dives under the much smaller Caribbean Plate, creating the 500 mile-long Puerto Rico trench (right side of Figure 1). It reaches to depths of up to 27,500 feet, making it the deepest point of the entire Atlantic Ocean. Like other subduction zones, the movement of the plates can create megathrust quakes, like that in 1787. The relative speed with which the two plates collide is about one inch per year.

South of the two islands, the Caribbean Plate is also dipping shallowly under Puerto Rico and Hispaniola, resulting in the Muertos Trough, translated as the Trough of the Dead. Although this depression of the seafloor is not nearly as pronounced as the Puerto Rico trench to the north, it reaches a depth of approximately 15,000 feet. This subduction causes the earth's crust to break in dozens of earthquake faults between the subsea trough and the southern coasts of Puerto Rico and Hispaniola. According to Victor Huerfano, director of Puerto Rico's Seismic Network at the territory's university in Mayaguez, the current series of shallow quakes are occurring along three of these faults: The Lajas Valley, the Montalva Point and the Guayanilla Canyon Faults.

Because many houses and structures were badly damaged by the two strongest quakes, Governor Wanda Vázquez has declared a state of emergency for the entire island. Along the southern coast several hospitals sustained so much structural damage that they had to be evacuated. Hundreds, if not thousands of Puerto Ricans have moved to shelters, because their homes have become uninhabitable. (hra171)