A Quake Inside a Diving Plate

The magnitude 7 earthquake which shook large parts of Alaska last Friday morning (Nov 30, 2018) caused extensive damage in and around Anchorage, with more than 300,000 inhabitants, the largest city our northernmost State. Roads crumbled, wide cracks appeared in bridges and overpasses, and the Alaska Railroad line between Anchorage and Fairbanks has been closed since the quake due to significant damage to the tracks. Fortunately only minor injuries and no fatalities were recorded, although several occupied buildings were majorly damaged. Friday's quake was the most destructive temblor in "The Last Frontier" since the Good Friday quake of March 1964. Then, a magnitude 9.2 earthquake ripped through Prince William Sound and along the coast south of Anchorage. That quake caused a tsunami in which more than 130 people perished. The Good Friday quake was the strongest temblor ever measured in North America and the second strongest in the world. It was almost a thousand times more energetic than Friday's quake.

Figure 1: This animation shows how the destructive waves of Friday's M=7 earthquake spread over the southern portion of Alaska. It took almost two minutes for the strong shaking to reach Fairbanks, shown in the upper right of this is 275,000 square mile oblique view of southern Alaska.
Credit: Carl Tape, Geophysical Institute of the University of Alaska in Fairbanks 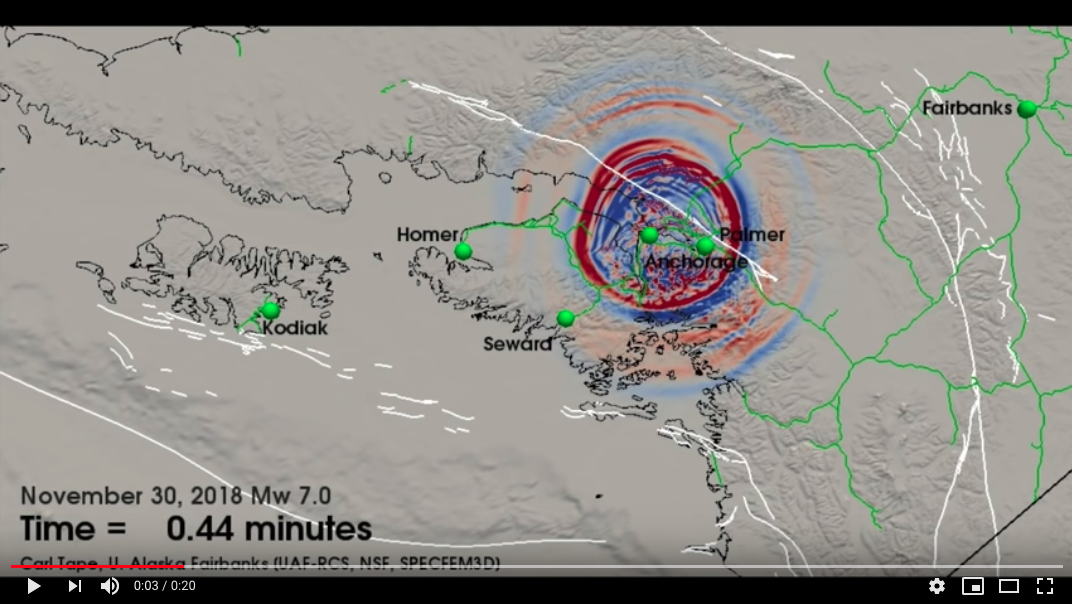 Figure 1: This animation shows how the destructive waves of Friday's M=7 earthquake spread over the southern portion of Alaska. It took almost two minutes for the strong shaking to reach Fairbanks, shown in the upper right of this is 275,000 square mile oblique view of southern Alaska.
Press ESC to close video dialog

Figure 1: This animation shows how the destructive waves of Friday's M=7 earthquake spread over the southern portion of Alaska. It took almost two minutes for the strong shaking to reach Fairbanks, shown in the upper right of this is 275,000 square mile oblique view of southern Alaska.
Credit: Carl Tape, Geophysical Institute of the University of Alaska in Fairbanks

Most of the 40,000 earthquakes recorded annually in Alaska, are the result of the collision between the giant Pacific plate and the North American plate. The Pacific plate is moving continuously towards the northwest at a speed of about 2.5 inches per year. Here in California, these two plates grind horizontally past each other, leading to strike-slip earthquake movements along major faults like the San Andreas and Hayward Faults. Up north, however, the dynamic of the interaction between the two plates changes. As Alaska and the Aleutian Island chain wrap around the Pacific plate, the horizontal motion becomes a frontal assault: The Pacific plate slams directly into the North American plate.

This collision, however, in no way stops the Pacific plate. The plate continues to push on its relentless journey towards the northwest. The North American plate absorbs some of the energy of this movement by buckling and folding, leading to the rise of mountain ranges like the Chugachs, to the south of Anchorage. While this is happening at the surface, the main thrust of the collision shifts deep underground, as the Pacific plate continues its travel by diving under the North American plate in what is called a "subduction zone". The downward motion begins at the contact zone between the two plates along the Aleutian trench about 80 miles offshore. The further northwest one goes from there, the deeper the plate has subducted. 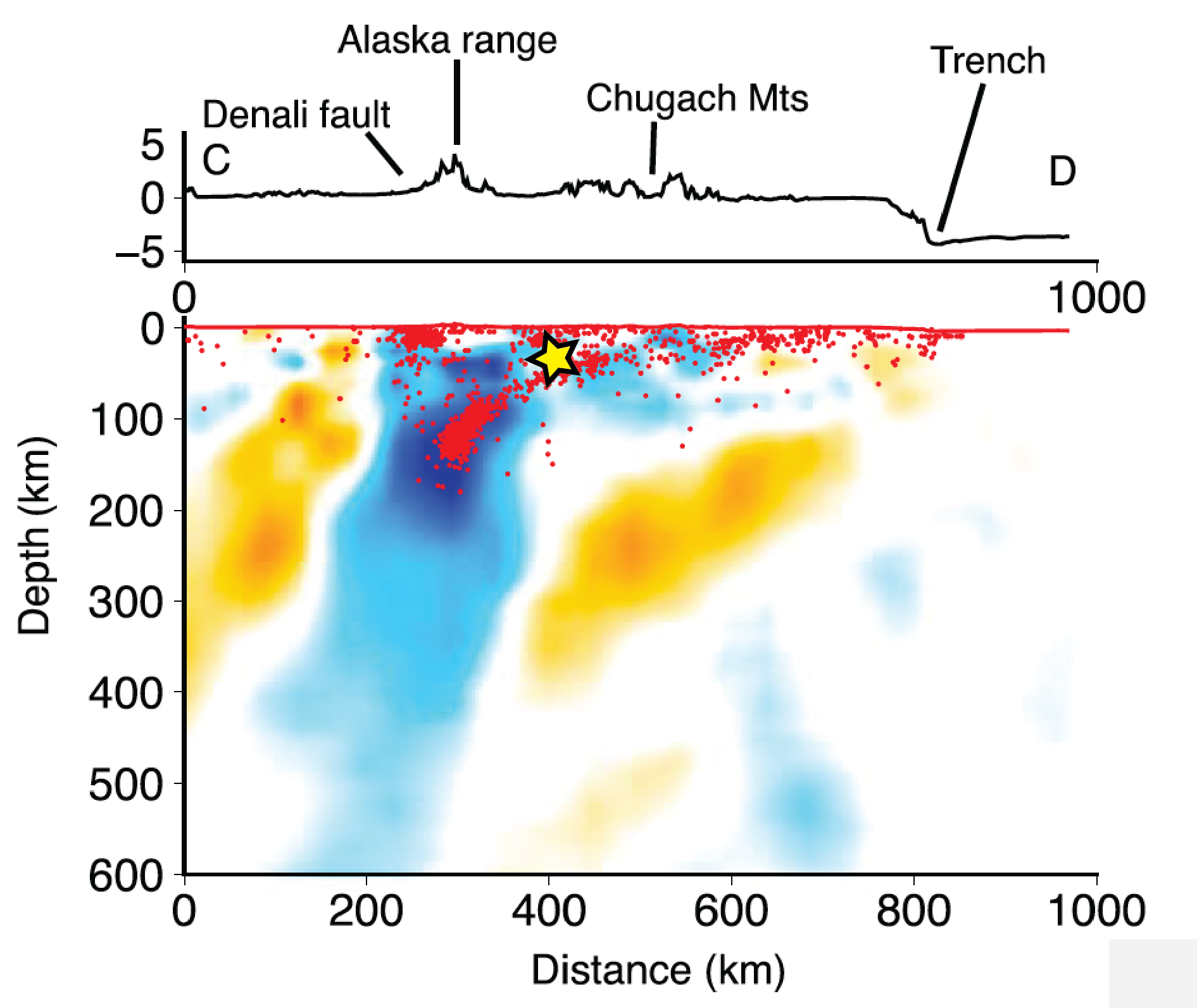 Figure 2: The yellow star shows the approximate location of the hypocenter of Friday's quake in a tomographic cross section through Alaska. The section starts at the Aleutian trench on the right and progresses northwest to beyond Mt. Denali in the Alaska Range. It reaches down to a depth of about 400 miles. The blue colors represent the contours of the downgoing Pacific Plate. The corresponding earthquakes are indicated by red dots.
Source: Robert Martin-Short, Berkeley Seismological Laboratory.
Adapted from Geophysical Research Letters (DOI:10.1002/2016GL070580)

This dive also changes the characteristics of the earthquakes generated by the plate movement. Instead of exhibiting horizontal motion along a fault like here in California, the two flanks of a fault start to move vertically. In the huge Alaska quake of 1964 the leading edge of the North American pushed upwards by several dozen meters. Because part of that movement was under the seabed, the water above was displaced suddenly, leading to the deadly tsunami.

However, the epicenter of Friday's magnitude 7 quake was far from the coast. It was located about eight miles north of Anchorage, across the Knik Arm of the Cook Inlet. Beneath this location, the top side of the Pacific Plate has already reached a depth of about 25 miles. As it goes down, the plate is under enormous mechanical stress and starts to bend. The damaging quake on Friday occurred when the rocks inside the diving plate finally cracked under this stress.

Over the past decade, seismologists have learned to map the subduction of the plates in detail. They use a method called seismic tomography, which is similar to the technique applied during a CAT-Scan in medical diagnostics. While physicians use X-rays to generate three dimensional pictures of the inside of the human body, in seismology we use seismic waves to illuminate the interior of the Earth. One of the Berkeley Seismological Laboratory's graduate students, Robert Martin-Short, has applied this method to Alaska and has mapped the downgoing slab under Anchorage and elsewhere in the region. Figure 2 shows the approximate hypocenter of Friday's quake plotted on the results of one of Martin-Short's tomographic calculations. (hra161)