A Deadly Quake and a Tsunami Mystery

The strong earthquake, which struck the Indonesian island of Sulawesi just a few miles south of the equator on Friday evening (local time) was remarkable in many ways. It was not only the deadliest temblor so far this year. As this post is being written, the authorities had counted more than 840 people, who perished in the magnitude 7.5 temblor and its ensuing tsunami. Many more people are feared to be trapped under the rubble of collapsed buildings. In addition, its rupture mechanism was a strike slip which we seismologists usually don't associate with the capability of generating a large tsunami. Still, the maximum wave height of this quake's monster wave was reported to have been 18 feet. 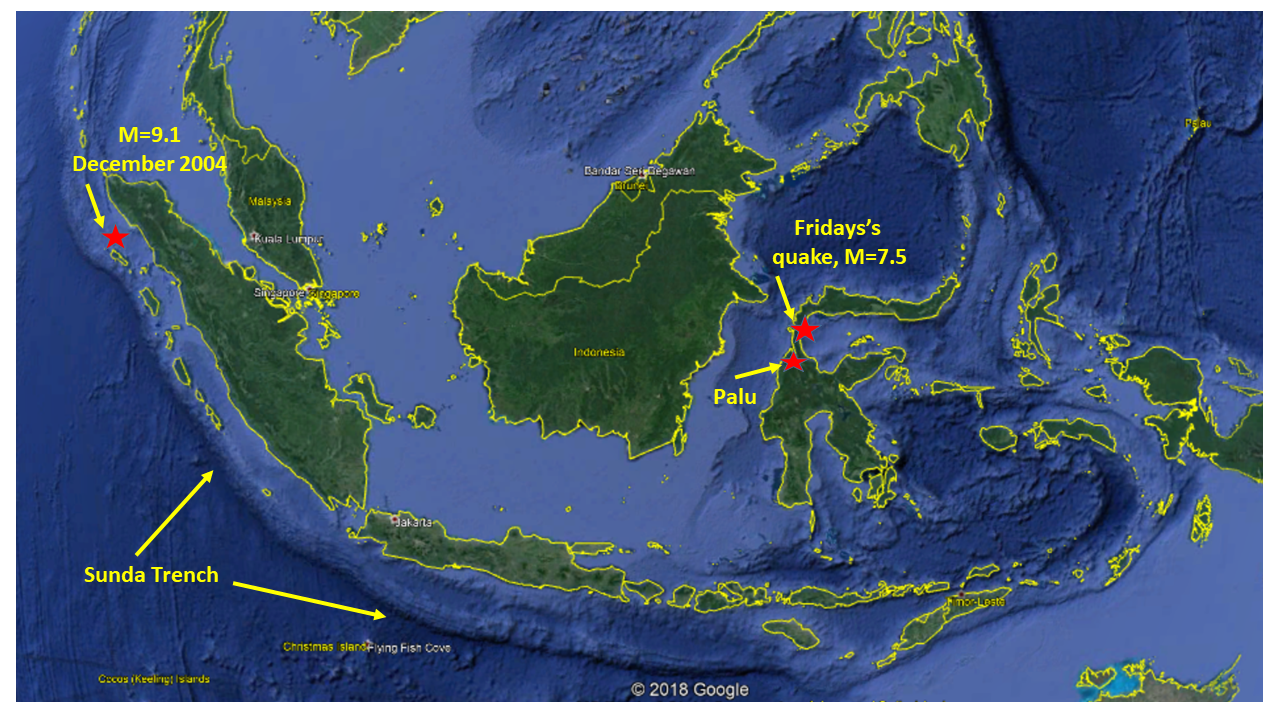 Figure 1: A Google Earth map of Indonesia, showing the location of Friday's quake and the epicenter of the magnitude 9.1 megaquake, which shook the region in December 2004.

Indonesia is by any measure the country with the largest threat on Earth of being hit by earthquakes and volcanic eruptions. Because of the sheer size of this tropical archipelago – its east-west extension is greater than that of the contiguous United States - most of its western and southern coasts are defined by a subduction zone. Along this dangerous tectonic demarcation line the Indo-Australian plate dives under an assemblage of various smaller plates. The series of deadly quakes which struck the Lesser Sunda island of Lombok in early August, was an example of earthquakes generated by this subduction. So was the third largest earthquake ever measured, the magnitude 9.1 quake which occurred off the northern coast of Sumatra at the end of December 2004.

The epicenter of Friday's temblor, however, lay 750 miles north of the ocean trench which defines the outer edge of the subduction zone. It was located on an extremely narrow land bridge between the Makassar Strait to the west and the Golf of Tomini in the east. This land bridge connects the main, southern part of Sulawesi to the northern extension of the island. During the past century about a dozen quakes with magnitudes of 6.5 occurred in this region, but only one of them exceeded the strength of Friday's quake. This temblor struck in January 1996 and had a magnitude of 7.9. Its epicenter was located about 75 miles further to the north. However, Friday's quake seems not at all related to the stronger temblor 22 years ago, because these two quakes had very different rupture mechanisms.

While the previous quake had an up-down thrust mechanism, Friday's shaker occurred along a strike slip fault. In such cases the two flanks of a fault line scrape against each other mostly horizontally. Such mechanisms are typical for California, where the San Andreas and its sister faults have a similar strike slip nature. But while the relative movement of the two flanks of California's faults is to the right, the quake in Sulawesi had a left lateral horizontal movement.

This becomes clear when two satellite images of the city of Palu in the most affected region are compared (see Figure 2). One was taken eight hours before the quake struck, the other about 15 hours after the quake. While the later picture shows that the pier in the upper left corner of the frame has disappeared and the bridge across the river in the center right has collapsed, the most remarkable information is contained in the line between the two red arrows. To the left of this line, there seems to be no difference between the two pictures, while to the right the whole city seems to have moved a step towards the top of the frame. If you look at the alternating images long enough, this motion becomes very clear. Measurements on the ground confirm that the Earth in this area has moved by up to 15 feet.

The line depicted by the arrows is the Palu-Koro Fault, which runs north-south through this densely populated city of more than 300,000 inhabitants. The seismic hazard associated with this fault had long been known. In a special publication about "Geohazards in Indonesia", published three years ago by the Geological Society in London, the scientists Ian Watkinson and Robert Hall wrote "the Palu–Koro Fault, which is long, straight and capable of generating super-shear ruptures, is considered to represent the greatest seismic risk of all the faults evaluated in this region in view of important strike-slip strands that appear to traverse the thick Quaternary basin-fill below Palu city."

It is still too early to explain why this strike slip earthquake generated the strong tsunami, which added to the devastation on Sulawesi Friday night. It is commonly thought that one needs a strong and rapid vertical movement of the seafloor to generate a significant tsunami wave. Because of their mostly horizontal motion, strike slip quakes are usually not considered to be tsunamigenic. One hypothesis is that the earthquake was strong enough to trigger an underwater landslide close to its epicenter north of the city of Palu. The slide would have displaced enough water to create a tsunami, and its height was amplified by the topography. The city of Palu is located at the end of a narrow bay, similar to Tomales Bay in Marin County north of San Francisco. (hra160)