Danger Lurking under the East Bay

When an earthquake struck the Northern Hayward Fault in the wee hours of Thursday morning, it was literally a wake-up call for thousands of residents of the Bay Area. Located at the mouth of Claremont Canyon, eight miles deep under the iconic Claremont Hotel in Berkeley, the magnitude 4.4 temblor was the strongest quake in this section of the Hayward Fault for decades. It was felt in all Bay Area counties from Guerneville in the North to Gilroy in the South. During the first ten hours after the quake, more than 34,000 people reported how they had felt the shaking and rattling to the "Did you feel it?" website, operated by the US Geological Survey. 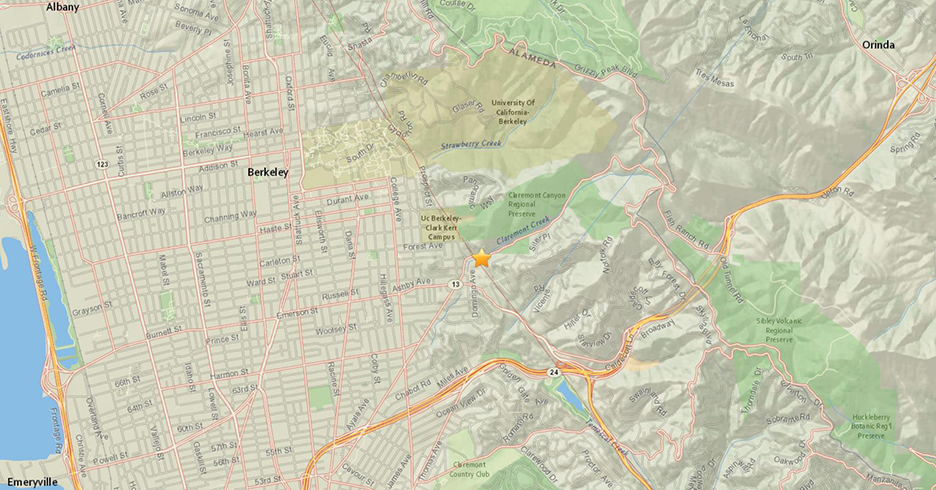 Fig 1. This map shows the epicenter (yellow star) of Thursday's earthquake at the mouth of Claremont Canyon. (Source: USGS)

The quake under Berkeley behaved exactly the way seismologists expected. It was a right lateral, strike slip motion along the Hayward Fault. The area west of the fault, that is, the lowlands of Berkeley and Oakland, moved a few tenths of an inch to the North with respect to the East Bay Hills. This northward movement is caused by the sliding of the Pacific Plate past the North American Plate. Over geologic time, the average rate of this movement is about two inches per year. The Hayward Fault is one of the three major earthquake faults in the Bay Area which convey this plate movement. This fault picks up about half an inch of the movement, while the two others faults, the San Andreas Fault further to the west and the Calaveras Fault in the east, convey the remainder.

The actual average rate at which the two sides of the Hayward Fault slide past each other is approximately half an inch per year. Some of this movement happens aseismically, that is without causing earthquakes. This gentle creep can be seen on the UC Berkeley campus just to the northwest of Thursday's epicenter. It leads to curbs being offset, and to cracks developing in road pavements and house foundations. The steady creep has even split the outer wall of the California Memorial Football stadium. This creep, however, only happens near the surface. Deep below, the Hayward Fault is locked and does not creep. Instead the stored energy from the plate movement is released in an occasional earthquake, like the one which happened early Thursday morning.

Fig 2. This is how the seismic station closest to the quake recorded the seismic waves. The station is located in a borehole on the north side of UC Berkeley's football stadium, less than a mile from the epicenter.

The fact that Thursday morning's quake was the largest one on the Hayward Fault for decades does not mean that it has released all the tectonic energy stored in this prominent East Bay fault. Although a quake with a magnitude of 4.4 can be widely felt, it is way too small to relieve the fault of the enormous mechanical stress that has accumulated there since the last really big quake on the Hayward Fault. On October 21, 1868, a quake several hundred times more powerful than Thursday's temblor struck under the city of Hayward. Its magnitude is estimated to have been almost seven. The 1868 quake caused widespread damage in San Francisco and what was then the sparsely populated East Bay. Thirty people lost their lives. Since that fateful day almost 150 years ago, the Pacific Plate has not stopped moving with respect to the North American continent. While other strong quakes have occurred on the San Andreas Fault along the boundary of the two plates in Northern California, the Hayward Fault has been continuing to accumulate its share of the plate movement. According to the latest probability estimates, the chances that another deadly temblor like the 1868 Hayward quake will occur on the Hayward Fault are estimated to be thirty percent in the next thirty years. Hence, Thursday's quake was a reminder of the danger lurking beneath the East Bay. (hra147)